Boeing and ERP in the Clouds

I was reading an article the other day by a friend and associate of mine Linda Popky. She is a US based consultant who specialises in marketing. She made an interesting observation. “While it’s too soon to know the definitive cause of this latest disaster, it’s highly unusual for two brand new airplanes, flown by experienced pilots of airlines known to be safety conscious, to fall out of the sky like this. The odds of two brand new aircraft of the same make and model randomly crashing within five months of each other are something like 1 in 10 billion.”
While Boeing originally maintained the aircraft were safe, they have now grounded them after a plethora of countries, Australia included, grounded them. I, for one, would not have my backside sitting in one of those planes at the moment. However, what is known at this point of time is: 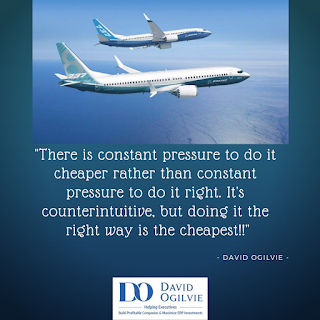 So, you may be asking what is the relevance of this to ERP flying in the cloud? The key points I see from these recent incidents are:
Don’t get me wrong, the new cloud era is not all doom and gloom. Many of the new cloud offerings have the potential to provide massive improvements in business performance when handled correctly.
It is just the landscape has changed and a company’s approach needs to change as well. The ERP landscape has been full of unlearned lessons. The industry seems to keep making the same mistakes over and over again. I believe this is due to the fact that executives rarely undertake these projects and when they do, they don’t or won’t look back and review lessons learnt. Case in point, I am frequently having the same conversation about budget and the components needed to successfully implement, over and over again with new prospects. There is constant pressure to do it more cheaply rather than constant pressure to do it right. Counterintuitively doing it the right way is the cheapest!
Experienced and independent advice can help you set your ERP strategy up for success and assist you to keep it on track. If you are thinking of a shift to the cloud, if your current software vendor has indicated you are no longer supported and need to move – then give me a call for a confidential chat

P.S. After writing this, the news has come through that the initial examinations of the black boxes are showing similarities in the behaviours of the Lion Air & Ethiopian aircraft.

© David Ogilvie
Posted by execstress at 09:07 No comments: